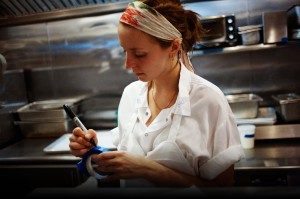 Christina Tosi is the chef, owner and founder of Momofuku Milk Bar, called “one of the most exciting bakeries in the country” by Bon Appetit Magazine. As founder of the dessert program at Momofuku, Christina helped Momofuku Ko earn two stars from the Michelin Guide and Momofuku Ssäm jump onto restaurant magazine’s top 100 restaurants in the world list. She is the 2012 recipient of the James Beard Rising Star Chef award. Christina lives in Brooklyn, NY with her three dogs and eats an unconscionable amount of raw cookie dough every day. 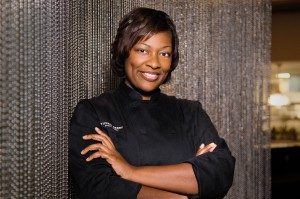 Beaumont, Texas native Tiffany Derry has always loved food, beginning her career in hospitality when she was just 15 working at the local International House of Pancakes. Although it may not sound glamorous, working there instilled Derry with an even greater sense of determination and responsibility, and by the time she turned 17, she was the youngest person to ever be in management at International House of Pancakes.
Upon graduating high school, Derry would go on to attend the Art Institute of Houston, where her love for cooking grew. In addition to learning all she could through classes and practical experience, Derry was also president of the Great Chefs Club and a member of the American Culinary Foundation Junior Chefs Team.
Derry’s first job out of AIH was at Pesce Restaurant, owned at the time by theCarrabba brothers. “My executive chef, Mark Holley, taught me so much about the business, food and life,” Chef Derry says. “He was also one of the few African-American chefs doing fine dining well and I was proud to be there. I watched, listened and worked my hardest every day.” Her dedication paid off, as she moved from garde-manger to Jr. Sous Chef. When the restaurant was acquired by Landry’s Corp, Derry worked her way to Executive Sous Chef at Grotto Cucina Napolitano.
Derry eventually moved to Dallas and became an instructor at the Art Institute of Dallas Culinary School, where she taught her students the business, and what it means to want something and go for it with all they have. She brought that work ethic and commitment to Dallas’ acclaimed Go Fish Ocean Club, where she was executive chef, and especially to Season 7 of Bravo’s Top Chef, where she was voted “Fan Favorite”.
It was on Top Chef where the country was introduced to Derry’s quiet confidence and genuine natural ability in the kitchen. Her overall talent and strong demeanor brought her far into the competition, and her personality made her a natural for Top Chef All-Stars, where Derry fared extremely well, making it to the final four chefs.
In 2010 Derry was brought on to help Patrick Halbert and Andy Austin build the Private | Social restaurant from the ground up. She opened the doors in 2011 to guest, celebrity and media fanfare that lasted a full year. In 2013 Derry turned the reigns over to Halbert and embarked on her new mission to become one of America’s best restaurant consultants and television personalities.
In addition to her television appearances, Derry is strongly committed to giving back to the community and has recently agreed to work with the Dallas Independent School District to revamp the school lunch program with healthier options for all students. She is also the national spokesperson for the Culinary Arts Program at the Art Institutes, helping to ensure all students have an opportunity to learn and hone the culinary trade. Her passion and dedication to her craft and those around her makes it clear that Derry is one of rising stars in both the culinary world and the local community. Derry lives in the Dallas area with her husband Mark. 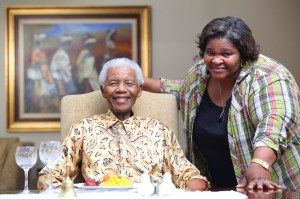 Xoliswa was born in Mlungisi, a rural township in Queenstown. She moved to Johannesburg in 1988 where she worked as a domestic cook before moving onto a Jewish Old Age Home.
In the 1990s right before the end of apartheid, Xoliswa suffered personal tragedy. Her husband was killed in the crossfire between Mandela’s African National Congress (ANC) and a rival contender for power, the Inkatha Freedom Party (IFP).
Tragedy struck again when her second husband died in a car accident. At the time her four children were being raised in the countryside by her mother and sister, 800km (500 miles) from Johannesburg.
However, Xoliswa’s fortunes changed when she was introduced to Mandela who at the time was looking for a chef. Xoliswa began working for him in 1992, two years before he won the first multiracial general election and became president of South Africa.
Upon first cooking for Mandela, he had said to her, “I believe you are a great cook, but can you cook our food? She replied with, “I cook ukutya kwasekhaya (home food) and that was that.”
Xolisawa became part of the family, cooking for everyone including Mandela’s grandchildren. She catered for everything from family reunions to late-night political strategy meetings. She even cooked for stars like Michael Jackson and Oprah Winfrey.